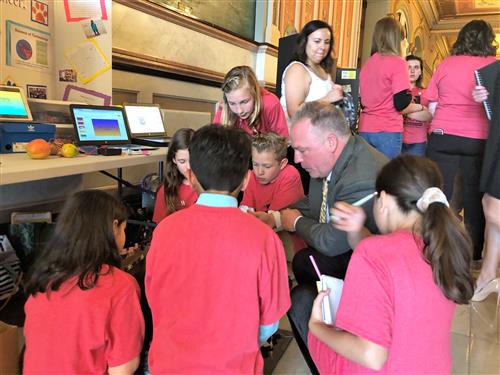 One misperception about technology in education is the belief that it leads to kids passively staring at computer screens. A group of fifth-graders from Prairiewood Elementary School helped challenge that assumption Tuesday by presenting at the Illinois Computing Educators TECH 2019 student demonstration in Springfield.

Woodstock Community Unit School District 200 began rolling out one-to-one technology in 2015 issuing Chromebooks to students. The laptops are much more than textbooks on a screen. Interactive curriculum, research and video tutorials are all part of the modern learning process.

In preparation for TECH 2019, fifth-grade dual language students in Jennifer Bigler’s class were challenged to become “elementary experts” by researching and designing a product or service that could benefit society. Six student projects were selected to represent these ideas at TECH 2019.

Krishna Patel used technology to design a marble racetrack to stress the importance of finding a balance between technology and old-fashioned play in kids’ spare time.

“The problem was that many kids get yelled at for playing on their electronics too much so I wanted to create something that entertained kids but at the same time gave them knowledge,” he said.

Hayden Williams came up with a plan to deliver boxes of toys and games for homeless children. Ana Mugica designed a flute from a PVC pipe for kids who can’t afford the cost of band instruments.

Alina Cruz designed a plan to teach origami to reduce stress, and Maria Fernandez designed a battery powered by fruit that lasts for three days to cut down on battery pollution. Hunter Hasan even produced his own slick commercial for his game controller that works with any kind of console.

TECH 2019 is an effort to make legislators understand the importance of technology in Illinois schools by demonstrating the creative ways that teachers and students are implementing it.

“I think technology in schools is important because it gives you a better education, and you’ll need it for a job in the future,” fifth-grader Ana Mugica said.

“This was a great way for our kids to help be policy makers and effect government change,” Bigler said. “This was a great opportunity for my students to share with state legislators how they use purposeful technology to analyze real-world problems and innovate solutions. It was inspiring to see them interact with students around the state and exchange ideas.”

Students also met with State Senator Craig Wilcox, R-McHenry, and presented their projects. About 100 schools across Illinois participated in TECH 2019.

“The kids were so excited to meet Sen. Wilcox and share their projects with him. There was so much to glean from other students and teachers. Watching these kids take pride in their work and share their knowledge with others is really what this is all about,” Frisbie said. 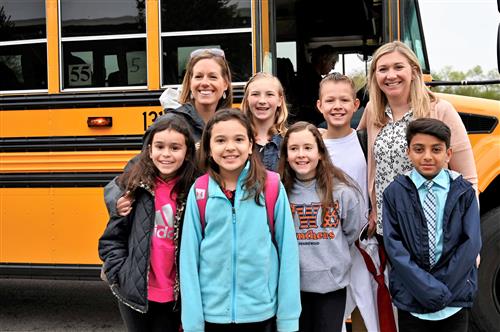 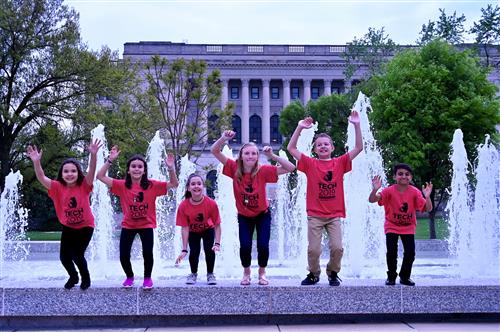