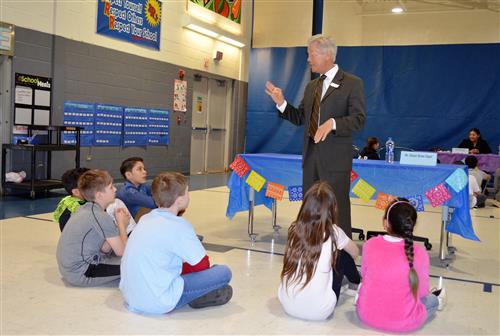 Dual language students at Mary Endres Elementary School had a chance to hear from professionals who’ve benefited in their careers by being able to speak multiple language.

About one-third of students in Woodstock Community Unit School District 200 voluntarily participate in the dual language program where half of their day is taught in English and the other half is in Spanish. The classes are a mix of native English and Spanish speakers, and the results are students who become fluent and literate in both languages.

On Friday, May 3, professionals including a nurse, a substitute teacher and office worker, a Realtor, an accountant and Woodstock Mayor Brian Sager spoke with students about how their ability to communicate in multiple languages has affected their lives.

The presenters spoke in the language of their choice often mixing between the two.

“I travel a lot of Spain, Mexico and Puerto Rico,” Escobedo said. “My colleagues are all over the world so whenever they need someone who speaks Spanish, they’ll come to me.”

Fifth-grade teacher Lauren Regner said she and her colleagues organized the bilingual job fair so students could see how their efforts will eventually pay off. She said they were able to find a nice mix of professionals who were willing to speak with the students.

“We wanted to show the practical application of being bilingual for their life and their work. It’s much more than just the ability to use some different words,” Regner said.

Escobedo said she was impressed with how well the students from first- through fifth-grade engaged with the presentations.

“This is great because some of them are probably wondering, ‘When am I going to use this?” Escobedo said.